The Psalter According to the Seventy

Give heed, O my people, to my law; incline your ear unto the words of my mouth.
2 I will open my mouth in parables, I will utter dark sayings which have been from the beginning,

3 Even those things that we have heard and have known and which our fathers have told us.

4 They were not hid from their children in another generation.

5 They declared the praises of the Lord and His mighty acts and His wonders which He wrought.

6 And He raised up a testimony in Jacob and appointed a law in Israel,

7 Even those things He had commanded our fathers, to make the same known unto their children, that another generation might know,

8 Even the sons about to be born, that they in turn might arise and declare them unto their sons,

9 That they might set their hope in God, and not forget the works of God, but seek after His commandments,

10 That they might not be as their fathers, a generation perverse and provoking,

11 A generation that set not their heart aright, and which kept not their spirit steadfast with God.

12 The sons of Ephraim that bend and shoot with bows turned back in the day of battle.

13 They kept not the covenant of God, and in His law they were not fain to walk.

15 He divided the sea, and brought them through; He made the waters to stand as in a wineskin.

16 He guided them with a cloud by day, and all the night with a light of fire.

17 He divided the rock in the wilderness, and gave them to drink as in a great deep.

18 He led forth water out of the rock, and brought down waters like rivers.

19 And they added yet more sin against Him, they embittered the Most High in the waterless place.

20 And they made trial of God in their hearts, by asking food for their souls.

21 And they spake against God, and they said: Cannot God prepare a table in the wilderness?

22 Because He smote a rock, and waters streamed forth, and the torrents overflowed,

23 Cannot He give bread also, or prepare a table for His people?

24 Wherefore, the Lord heard and was stirred up, and a fire was kindled in Jacob, and wrath rose up against Israel,

25 Because they believed not in God, nor hoped in His salvation.

26 And He commanded the clouds from above, and opened the doors of heaven,

27 And rained manna on them to eat, and bread of heaven did He give unto them.

28 Man ate the bread of angels; provision He sent them to the full.

29 He removed the south wind from heaven, and brought in by His might the southwest wind.

30 And He rained on them flesh as it were dust, and feathered birds like the sands of the sea,

31 Which fell in the midst of their camp, round about their tents.

32 And they ate and were filled exceedingly, and their desire did He give unto them; nor were they deprived of their desire.

33 But while their food was yet in their mouth, the wrath of God rose up against them.

34 And He slew their stout ones, and shackled the choice men of Israel.

35 In all these things they sinned the more, and believed not in His wonders.

36 And their days were consumed in vanity, and their years with haste.

37 When He slew them, then they sought after Him, and they turned back and enquired early after God.

38 And they remembered that God is their helper, and that God the Most High is their redeemer.

39 And they loved Him with their mouth, and with their tongue they lied to Him,

40 For their heart was not right with Him, nor were they faithful in His covenant.

41 But He is compassionate and will be gracious unto their sins, and He will not destroy.

42 And many a time will He turn His anger away, and will not kindle all His wrath.

43 And He remembered that they are but flesh, breath which passeth away and cometh not back again.

44 How often did they embitter Him in the wilderness, and move Him to wrath in the waterless land!

45 They turned back and made trial of God and provoked the Holy One of Israel.

46 They remembered not His hand, nor the day wherein He redeemed them from the hand of the oppressor,

47 How He had wrought in Egypt His signs, and His marvels in the plain of Tanis.

48 Yea, He had turned into blood their rivers and their rainfalls, that they might not drink.

49 He had sent against them the dog-fly, and it devoured them; and the frog, and it destroyed them.

50 And He had given to the cankerworm their fruits, and their labours to the locust.

51 And He destroyed with hail their vine, and their mulberry trees with frost.

52 And He had given over to the hail their cattle, and their substance to the fire.

53 And He sent forth against them the wrath of His anger, anger and wrath and affliction, a mission performed by evil angels.

54 He had made a path for His wrath, and He spared not from death their souls, and their cattle He shut up in death.

55 And He had smitten every firstborn in the land of Egypt, the firstlings of all their labour, in the tabernacles of Ham.

56 And He took away His people as sheep, and He led them forth as a flock in the wilderness.

57 And He guided them in hope and they feared not, and the sea covered up their enemies.

58 And He brought them unto the mountain of His sanctuary, this mountain which His right hand had gained as a possession.

59 He cast out the heathen from before their face, and apportioned them an inheritance by lot.

60 And He settled in their tents the tribes of Israel.

61 But they tempted and embittered God the Most High, and His testimonies they did not keep.

62 And they turned back and brake covenant, even as their fathers did; they became like unto a crooked bow.

63 And they provoked Him to wrath among their hills, and with their graven images they moved Him to jealousy.

64 God heard and regarded them no more, and set Israel utterly at nought.

66 And He gave over to captivity their strength, and their beauty into the hands of enemies.

67 And with a sword He enclosed His people, and His inheritance did He regard no more.

68 Fire consumed their young men, and their virgins lamented not.

69 Their priests fell by the sword, and none shall weep for their widows.

70 And the Lord awoke as one that sleepeth, like a mighty man grown cloyed with wine.

71 And He smote His enemies upon their backs, reproach everlasting He gave to them.

72 And He rejected the dwelling of Joseph, and He chose not the tribe of Ephraim.

73 And He chose the tribe of Judah, Mount Sion which He loved.

74 And He built His sanctuary like that of a unicorn, on the earth He established it for ever.

75 And He chose out David His servant, and took him up from the flocks of sheep, from following the ewes great with young He took him,

76 To shepherd Jacob His servant, and Israel His inheritance.

77 And he did shepherd them in the innocence of his heart, and by the skillfulness of his hands he guided them.

Here you can access individual chapters and kathisma of the The Psalter According to the Seventy . Kathismata range from 1 to 20. Chapters range from 1 to 151 (there's an extra Psalm in the Septuagint.)

Psalter According to the Seventy, copyright 1974 Holy Transfiguration Monastery , Boston, MA
Prayers from the Great Horologion are copyright 1997 Holy Transfiguration Monastery , Boston, MA, and are used with permission.
Translations of troparia and kontakia from the complete Menaion trans. Br. Isaac Lambertsen, published by The St. John of Kronstadt Press are used by permission.
Content from the Octoechos and Menaion are copyright www.st-sergius.org and are used with permission. 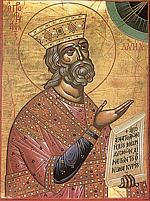